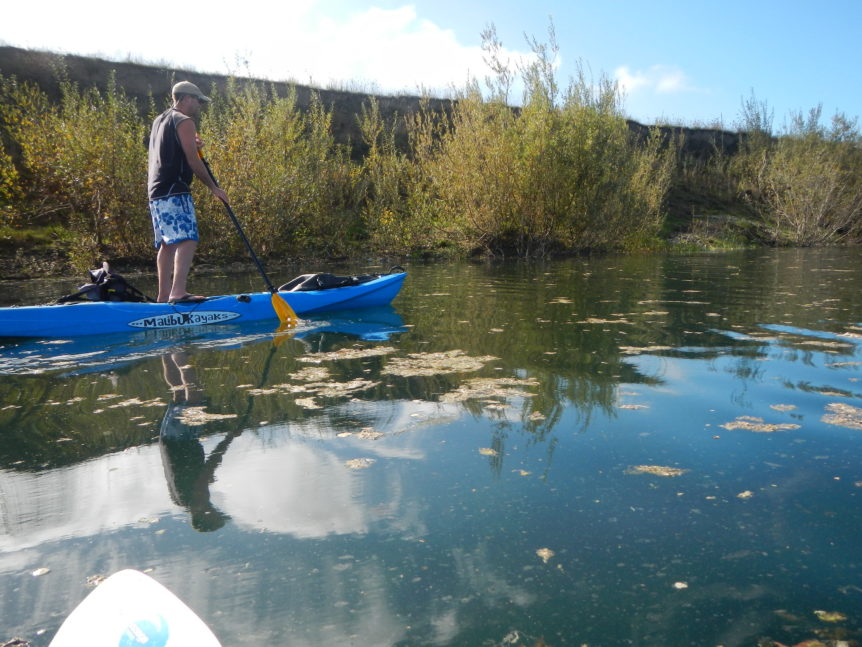 The Eel River Recovery Project (ERRP) has successfully estimated the Eel River fall Chinook run since 2012, and each year is unique and has different challenges. The 2015-2016 citizen assisted monitoring project was the most difficult, however, because early rains failed and dives were not able to be scheduled, and then rainfall was so high after December 1 that observations of migrating and spawning Chinook salmon were limited for protracted periods.

Despite the El Nino conditions in the ocean that are usually linked to increased precipitation, rains from September through November were extremely sparse. Lower Eel River flows as measured by the U.S. Geologic Survey at Scotia did not exceed 100 cfs until November 11, which limited fish passage and prevented normal fall flushing of algae beds. Algae impairs visibility and harbors swimmers itch organisms. Consequently, dive surveys were restricted to the 12th Street Pool that is deeper and mixed by winds and other pools were surveyed by kayak.

Early run Eel River fall Chinook were confined to the estuary during late August and early September as flows at Scotia were only just over 30 cubic feet per second (cfs). ERRP documented movement of fish upstream as far as the 12th Street Pool by September 21 after light rains, but the major influx into lower river pools was with extremely high tides from October 22-24. Hundreds of Chinook salmon sat in shallow, algae infested pools and about 10% of early run fish went blind as a result of a fluke attacking their eyes.

Infected Chinook salmon captured by California Department of Fish and Wildlife with assistance from ERRP and sent to UC Davis for analysis. Photo by Eric Stockwell. 11/06/15.

Before December 1, Chinook salmon access to headwaters was limited, with spawning on the main Eel below Dos Rios, the South Fork below Leggett, and the Van Duzen River downstream of Goat Rock Falls. After December 1, flows were adequate for access and spawners were seen in low numbers throughout the basin, including upper Outlet Creek, Ten Mile Creek, the Middle Fork and Black Butte River, and the upper South Fork near Branscomb. Lower South Fork Eel River tributaries showed a late fall Chinook run peak in mid-December. Chinook arrived at the Van Arsdale Fish Station on December 6, and only 102 fish passed upstream to spawn during the entire season. Spawners were noted in Ten Mile Creek and upper Outlet Creek, but none were seen in Tomki Creek (SEC 2016). ERRP once again found that sediment impairment limited spawning use of a number of other Eel River tributaries. ERRP used historic run timing and professional judgment regarding fish response to flows to arrive at an estimate for the 2015-2016 late run of 5,000-10,000 fish. The total 2015-2016 Eel River fall Chinook run total estimate is 10,000-15,000. The population is showing a declining trend since 2012, but remains above 10,000 fish and at no risk of loss of genetic diversity. High jack counts indicate another strong year class and improved ocean conditions and restricted ocean fisheries may also favor population rebuilding in 2016-2017. However, ERRP has concern about survival of adult Chinook salmon in the lower Eel River due to poor holding habitat, and strongly encourages expeditious restoration to improve conditions. The 2015-2016 fall Chinook assessment was funded in part by the Ft Bragg based Salmon Restoration Association, which sponsors the annual World’s Largest Salmon BBQ on 4th of July weekend, and the Patagonia World Trout Fund. ERRP has also become its own 501(c)3 non-profit corporation and is soliciting support from the community to make its programs sustainable. To learn more and donate on-line, visit the ERRP website at www.EelRiverRecovery.org. Membership is $25/year for individuals or $35/year for a family and can be mailed to P.O. Box 214, Loleta, CA 95551. To join 2016-2017 fall Chinook dives in October, call Eric Stockwell at (707) 845-0400. You can also follow ERRP on Face Book.