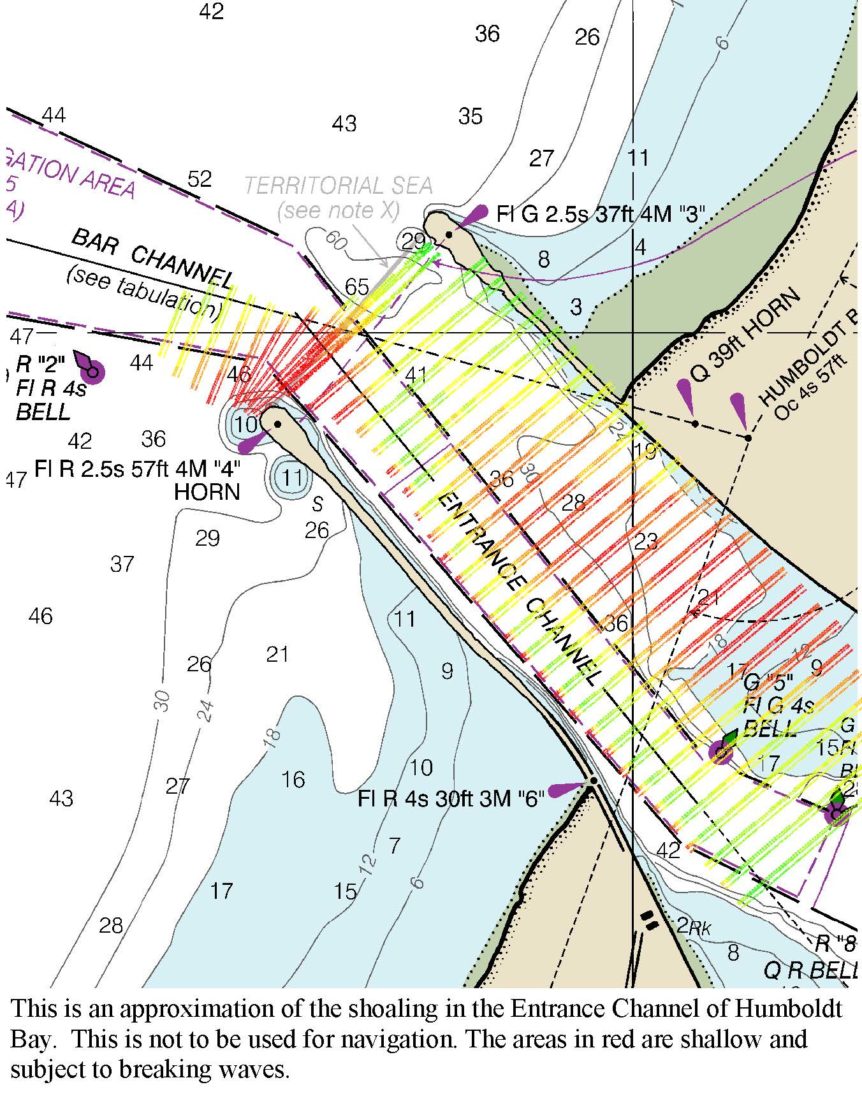 I attended a meeting April 15th at the Harbor District concerning the shoaling at the entrance to Humboldt Bay. Emergency dredging will occur but not in time to alleviate the danger before our ocean seasons begin. The US Army Corp of Engineers dredge, Essayons, will arrive sometime between May 4th and the 10th after finishing work in Hawaii.  It will work to dredge the entrance of Humboldt Bay for 25-35 days. That means we will see dangerous bar conditions well into June.  Pacific halibut season opens May 1st, with rockfish opening May 15, and salmon May16th (pending).

Important update 4/28/16 – It was determined by the Corp of Engineers that the dredge Essayons has a draft too deep to safely dredge the shallow shoaling at the entrance to Humboldt Bay. Instead, the dredge Bayport, will arrive May 20th and work to clear the entrance, then move to dredge the inner channel to Schneider Dock.  Because of this, dangerous conditions at the entrance will persist until late June when dredging is completed.

Everyone at the meeting was first and most concerned with the safety of the recreational fleet. There were questions about how to get the message to local and visiting anglers.  HASA volunteered to spread the word to the fishing community through email, web posts, and a flyer distributed to fishing/boating related business and posted at boat ramps. HASA has already sent out emails and discussion board posts and will continue throughout the dredging operation

There is a shoal of sand at the end and inside of the South Jetty. It is at 14 feet and waves can break there at any tide.  It is also shallow in the mid channel. By the soundings, the deep water is along the South Jetty then doglegs north to mid-channel.  This is not normal shoaling. El Nino driven winter storms spawned waves approaching 40 feet. This moved more sediment into the bay than ever. Normally, boaters could plan to cross the bar on an incoming tide and find calm conditions. But this shoal is so shallow waves can break on any tide.  The outgoing tide meeting the ocean swell could be extremely dangerous.

Boaters are advised to know the marine weather forecast and keep track of the tide times.  Monitor VHF channel 68, recreational anglers will provide a current bar report. Plan your return for the safest time and stick to your plan. Your best defense is in your eyes and your judgment. Do not take chances. The US Coast Guard bar and entrance report phone # 707-443-2213.

The meeting discussion turned to a long term solution to the shoaling, which is directly blamed on sediment run-off from the Eel River. The Eel was once 30-40 feet deep all the way to Rio Dell. Sediment has filled the river and spilled into the sea. During the winter, the north current carries the sediment along the beach where it collects in the entrance of Humboldt Bay.   The runoff from the Bay, and the south current that runs during the summer, are not strong enough to disperse the sediment.

.   It was agreed to commence a Humboldt Bay Long-Term Sediment Management Study with the Harbor District, the Corp of Engineers, and other stakeholders.  The study will take 3 years and $3 million dollars to complete. One of the ten identified options is to build an artificial reef south of the south jetty to trap and divert sediment into deeper water.  The options range from physical barriers, extending the jetty, to enhanced dredging plans.